We all focus on the ability to start a fire as the most important survival skill to master.

Each survival instructor tries to outdo the last, coming up with a newer and more unusual way of starting a fire. While all of those methods work and may even be useful at some time, they’ll only be useful if we’re not prepared to start it in an easier way.

There’s no reason to make a lens out of a chunk of ice you cut from a frozen stream or use a bow drill to get a lump of coal glowing if you’ve got a good stormproof lighter to work with.

But none of those fire starting methods are going to any of us the least bit of good unless we’ve got something to burn. Yet I see very little said about cutting and splitting the wood for that fire. The little I do see is associated with a bug-out bag and is mostly concerned with building a temporary shelter.

In other words, you really wouldn’t want to cut firewood with a pocket chain saw.

But if we’re going to heat our homes with wood, we’re going to have to face the fact that we’re going to be cutting and splitting a lot of logs. Even if we have a chain saw available to us, we’ll eventually run out of gasoline for it. Gasoline doesn’t store very well, so don’t be expecting to use that chain saw for several years after the power goes out.

You’ll be lucky if it’s still running after six months.

You’ll need a lot of firewood if you’re going to be heating with wood. People in the northern part of the United States, who are heating with wood, tend to burn somewhere between four and six cords of wood per winter; that’s good hardwood too; not pine.

Related: How to Store and Stack Firewood The Right Way

That means having the right tools for cutting down those trees, bucking then down to the width of your fireplace or wood-burning stove, and then splitting the logs into usable chunks of wood. It’s much easier to get the wood to burn, if the heartwood is exposed, rather than just bark, so it’s always a good idea to split your wood unless the pieces are so small as to be nothing more than kindling.

Before looking at some specific tool types, I want to clarify something; the difference between axes and mauls. A lot of people equate the two as if they are the same. But they’re not. While both are useful in this process of getting wood for your fire, they can’t be used interchangeably.

The basic difference between the two is the width of the head. An axe head is narrow, and might even be hollow ground to make it narrower. It also needs to be sharp. That’s because the purpose of the axe is to cut across the grain of the wood, as you would have to, to fell a tree.

In fact, you’ll probably want to sharpen it every time you use it, because the steel is relatively soft and can dull quickly. But the narrow head is virtually worthless when trying to split wood.

In contrast, the maul has a much thicker head, even though most mauls look a lot like an axe. While it is helpful for a maul to be sharp, that isn’t as critical as it is for an axe. Rather, the key to a maul is leverage. As you drive it into the wood, the broad head puts a lot of side-pressure against the grain of the wood, separating it and causing it to split.

However, that broad head makes it all but impossible to cut a tree down with a maul.

Now, on to the best types of wood cutting tools to have for gathering and splitting that wood. While my intent is to give you categories of tools, more than specific models, I am mentioning a few specific models that have unique features or provide unique methods that make them better than the average.

The felling axe is your basic tree felling tool. What makes it unique, as compared to other axes, is that it has a long, curved handle, which provides a lot of leverage. That leverage coverts directly to the speed the axe head is moving when it strikes the tree, which ultimately leads to a deeper cut. 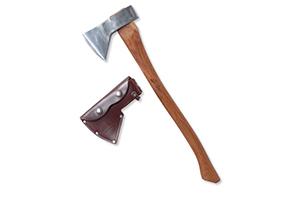 Some people prefer a double-headed axe, because it allows them the option of having one bit sharper than the other or of going a longer time between sharpening.

But that larger head is heavier, making it harder to wield the axe. As opposed to splitting wood, where weight converts into a greater downwards push from the mail, you have to hold up the weight of that heavier axe head while swinging it horizontally. Unless you’re extremely muscular, that’s hard to do.

I wouldn’t cut corners, buying a cheap felling axe, as that will mean cheaper steel, which won’t stay sharp as long, just like a cheap knife. I also like the idea of buying an axe that comes with a blade cover, as that protects your newly sharpened blade.

There are times when cutting down a tree with an axe just isn’t practical, especially with a larger diameter tree. In those cases, you really need a saw. Since we’re assuming you can’t use a chain saw, that means a crosscut felling saw, which can be a bit hard to find. 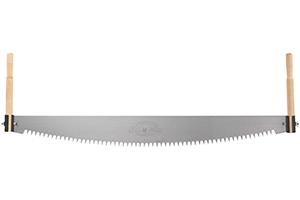 This is the old-fashioned saw that lumberjacks used, before they got their chainsaws. While we all have an image of lumberjacks with axes over their shoulders, they more often than not used a two-man saw of this type.

Then they would use their axes to cut off branches and prepare the logs for cutting to length. With large enough trees, they’d even cut them to length with this sort of saw.

When it comes to bucking your logs down to a size that will fit in the fireplace, there’s nothing that I’ve found which beats an old-fashioned buck saw. 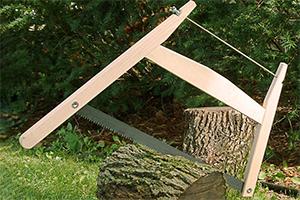 As far as I know, there’s only one place in the country still selling these, but they work just as good as ever; perhaps better, as they are using better quality steel for the blade.

A buck saw of this type will make much shorter work of bucking branches and trunks down to a usable length, than a bow saw will. It’s also going to be easier on your hands and capable of handling larger diameter logs.

Your basic splitting maul is heavier than an axe, although I’ve seen some that are a bit on the light side. But the heavier it is, the more momentum you’re going to get on the downswing, resulting in more force behind that blade edge when it hits the end of that log you’re trying to split. 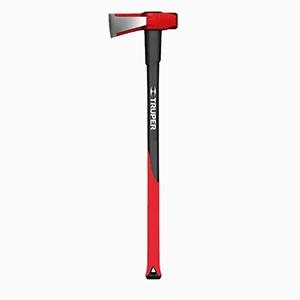 When looking for a splitting maul, concentrate on the shape of the head. The wider an angle it makes, the better. But that doesn’t mean that you want the whole head the same width. You’re actually better off with a head that has narrow protrusions out the sides, rather than the whole head being wide.

What that will do for you is reduce the friction, allowing the maul’s head to sink farther into the log, which results in more splitting force.

If you can handle the weight, a heavier head is an advantage too; as it will gain more momentum on the downswing, resulting in a harder hit. But watch out, even one extra pound can wear you out quickly if you’re not up to the challenge.

The Chopper 1 Maul is a uniquely engineered splitting maul, which has spring-loaded levers on the sides of the head. As the blade enters into the log, these catch on the end, swinging out to the sides, pushing the two sides of the log apart. 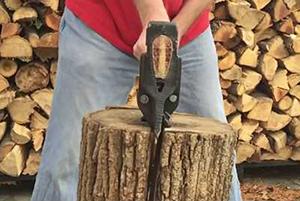 This increases the leverage considerably, making it possible to get much more lateral splitting motion out of each stroke.

It takes a lot of force to wield, as you have to get the blade into the log far enough to engage the levers, but you have to do that anyway to split the log with any maul.

The only possible disadvantage of this maul is that the springs and levers could break rendering it less than efficient to use. However, from everything I can find, looking at reviews online, this doesn’t seem to be an issue.

The Leveraxe is a total redesign of the splitting maul. While called an “axe” I don’t see any way this can be used to chop down a tree; every advertising video they have of it, shows it being used as a splitting maul, and it’s extremely efficient at that. It’s also fairly lightweight, making it much easier to use. 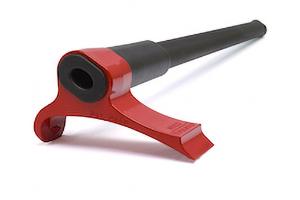 The whole thing about this tool is that it uses leverage to great advantage.

The head is out of line with the blade, so that as the blade strikes the log, it automatically twists to the side, prying the wood. This unique chopping action makes it about the easiest log splitter there is to use, especially for people who are not all that strong. 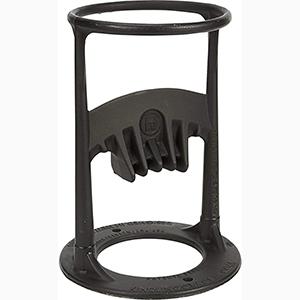 The Kindling Cracker takes splitting logs and turns it on its head. Rather than having the blade on the handle, it puts the blade in a holder, which the wood is then set into. To split the wood, a sledgehammer is used.

For those who don’t split wood very often, this tool offers the advantage that you don’t have to have a good aim with your tool.

If you are prone to hitting the wood with the maul at the wrong angle and deflecting off to the side, this is the tool for you. 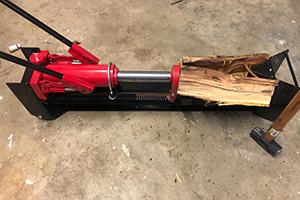 If you buy split firewood, it has probably been split using a gas-powered hydraulic log splitter.

There aren’t too many manually-powered hydraulic log splitters out there, but there are a few.

This is the ideal tool if you’re going to have someone that’s not all that strong doing the work. While slow, compared to the other methods we’ve talked about, a manual hydraulic log splitter is easy to use. In fact, it’s actually easy enough for the kids to use.

Never Throw Away Your Wood Ash! Do This Instead

How to Make Firebricks (fire logs) and Wood Stove Logs for Free!

30 Survival Uses for Wood Ashes You Never Thought of

Six Primitive Traps For Catching Game In The Woods

How Much Survival Food Is Enough – How Much Do I Need?

Camping Vacation: The Art Of Getting Lost

Idaho Trespassing Laws: What You Need to Know